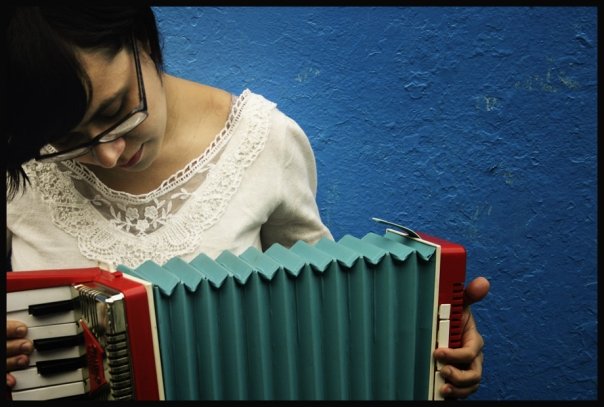 ComposerViews (CV): Angélica!  Thank you so much for agreeing to be the second featured composer in TRANSIT’s online interview series, ComposerViews. The idea of this feature is to give readers a peek into the minds of some of our favorite innovative composers, while also allowing those composers a chance to speak on their own terms about themselves and their music. Thanks for taking the time to share with us—now for some questions!

TRANSIT’s relationship with you goes back to 2009 when we commissioned a piece from you that has really become one of our “greatest hits,” What I’m Trying to Say Is… In this piece, in addition to playing our usual instruments, we also use a number of toys and toy instruments to produce sound. (Pun alert!) What are you trying to say by incorporating these unexpected sounds into your musical palette, and how were you first drawn to this idea?

Angélica Negrón (AN): I’ve always been very intrigued by toys because of their innate quirkiness and also their immediacy in appealing to people of all ages. What I’m Trying to Say Is… explores the frustration of misunderstandings in every-day communication, and I thought the directness of these toy instruments along with the use of noise through them was something that was highly appropriate for this particular piece. The toy instruments also convey a sense of playfulness that is very much a part of my work. I was first drawn to the idea of toy instruments a long time ago when I lived in Puerto Rico, which is also when I started collecting these instruments (mostly music boxes and toy pianos initially).  Listening to Margaret Leng Tan’s album, The Art of the Toy Piano, back then was a huge turning point in realizing that these small objects could also be incorporated in “concert” music, holding their own in this setting while still retaining their fun spirit.

CV: Like a number of young composers, your compositional work seems to function on two parallel planes—both through the creation of work for ensembles and performers through traditional commissions, and through the creation of music for your own bands and performing projects. How does maintaining these two models of composing affect your outlook as an artist? Do you feel that your compositional voice is essentially the same regardless of the format or does the individual project have an impact?

AN: I started my musical life as a pandero player in my mom’s womb but later studied piano for a bit and violin for a long time in the Conservatory of Music of Puerto Rico. I knew music was my thing but I never felt completely satisfied playing other people’s music, so I started my own band along with a friend. Even though the instrumentation for this band was a string quartet with voice and electronics, I used to think of this as something completely separate from my life as a “conservatory musician.” Suddenly after this it became very evident that I just wanted to write music, and that playing in bands was something that was a lot more fulfilling for me than playing in orchestras. After this band vanished, I started my main project, Balún, (along with José Olivares, who is now my husband) and, a bit later, my ambient project Arturo en el Barco. Bands have been my introduction to making music that was relevant to my reality and working on things that I honestly felt passionate about. I feel that now it’s very much a part of who I am, and I don’t necessarily separate the two, which has been really liberating as a composer in my various facets. I feel that my compositional voice stays essentially the same regardless of the format. Each project has its own aesthetic and my collaborators also bring their own thing to each, but in terms of my part I feel that my artistic interests and curiosities stay very similar throughout my work as a whole. They just take different forms each time.

CV: How integral to your musical personality is your experience with the underground music scene in Puerto Rico and your involvement with non-classical projects in general? Given the post-modern state of contemporary music, do you feel that experience playing in a band will be as important as conservatory study for the next generation of composers? Do you think the idea of what it means to be a composer is evolving in the current cultural environment?

AN: It’s everything I know and what made me want to write music in the first place. Growing up in Puerto Rico, access to watching bands that we liked in our island was basically non-existent, so the underground scene provided much needed alternatives and an escape from the constant merengue/bachata/pop ballads/reggaetón overload. My involvement in non-classical projects is a result of growing up in this saturated world of radio sounds and a product of participating in the underground scene in San Juan both as a listener and as a performer.

I feel that there’s definitely a significant wave of composers from my generation who also play in bands but likewise a lot of them have a parallel classical upbringing. I think that this will certainly influence the importance of non-classical training in composers of the next generation, but I honestly don’t know exactly to what extent. The idea of what it means to be a composer is definitely evolving in the present cultural environment, and it’s really exciting to hear/see what arises from these changes in perspective/interpretation.

CV: Can you tell us how Balún and Arturo en el Barco got their start? Was the instrumentation and general sound of each group determined in advance, or was it a factor of the personalities in each group?

AN: Balún started back in San Juan in 2001 when José and I got together to doodle around with Fruity Loops and a bunch of old Casio/Yamaha keyboards. When we first started out we played with a CD player and a small collection of vintage/toy keyboards. It was very electronic playful music that had a lot of influence from video game music. A few years later I started to write some words to a few of the songs, and we gradually shifted to a more intricate electro-acoustic dream pop, which is closer to what we’re currently working on. At that moment in time, we also incorporated some more friends in the band on guitar, bass and Puerto Rican folk instruments, and I also started to teach myself to play the accordion. The addition of all these new and mostly acoustic instruments to our heavily electronic sound was a result of our growing interest in different textures and also of the close friends we spent our time with and enjoyed playing music with. Nora [Noraliz Ruíz] and Andrés [Fontanez] grew up in the folk music tradition of Puerto Rico playing cuatro and tiple, so the incorporation of these instruments was something very natural to us as a band.

With Arturo en el Barco, I started working by myself on my computer with micro-samples, detuned pianos and layers of violins, which I recorded in my bathroom. The quality of the sounds I was working with and the recordings I was able to make at the time promptly gave the project a lo-fi aesthetic, which I fell in love with from the very beginning. It was sort of happy accidents happening one after the other and I embraced them. I also had two upright pianos at home, one of which was donated to us by an old boss of my mom.  This was a really old piano that was very out of tune, and the whole harp was exposed which led to me spending lots of time in the bottom part of the instrument. Most of the early Arturo en el Barco stuff came from this piano. Since at that time I wasn’t thinking about performing these pieces live, I experimented a lot during the creative process and learned a lot as well discovering techniques that I still use to this day.

CV: As a native of Puerto Rico living in NYC, do you feel that the dramatic shift in environment (and climate!) has affected your work? What are the particular challenges or benefits of being a young Puerto Rican composer in NYC, a place with such a deeply rooted Puerto Rican community?

AN: I think that nostalgia now is a bit more palpable in my music as I’m often attracted to and gravitate towards distant places that have been a part of me either in this life or in some imaginary past. Nostalgia has always been a part of my work, but more so recently after moving from my native island. Being a young Puerto Rican composer in NYC is exciting because hopefully I can bring a fresh perspective on the new sounds that are coming out of Latin America. It obviously has its baggage with all the immediate associations, but once people get past them and listen, hopefully they find a nice surprise.

CV: You clearly view education as a priority, given your establishment of the ¡Acopladitos! program and your work with the Brooklyn Philharmonic’s Residency Composition Initiative,  as well as the Teaching Artist Collaborative at Carnegie Hall. How do you think the New Music community can be most effective in promoting the musical education of today’s youth?

AN: I think education is obviously highly important in reaching out to as many people as possible, especially younger generations. I think that community concerts, workshops, and pre/post-concert talks are all great initiatives to connect our work with the audience and today’s youth. Personally, I think workshops and hands-on activities are pretty effective ways to reach out to them.  Many organizations, like the Brooklyn Phil, have great residency programs which bring teaching artists to public schools to do different types of creative work with children. Bang on a Can also has an awesome “instrument petting zoo” for the young ones at their annual Summer Festival at MASS MoCA. I feel that through creative work, close exposure, and music making, children start creating meaningful connections with works of art, which sparks their curiosity to listen to the music that’s been created today, regardless of the style.

CV: You have clearly been a very busy bee as of late with recent commissions from the MATA Festival, a high profile concert at the Ecstatic Music Festival, and your selection as a featured artist by Ableton. What are you working on right now, and what are some of the things you are most excited about in the coming months?

AN: I’m currently working with Balún on our next album and am also focusing on ¡Acopladitos!, writing new material for our second book/CD and preparing (along with my partners Nora and Tatiana) a fun summer camp in Brooklyn for the little ones. I’ve also just started working on a new opera for my ensemble Arturo en el Barco in collaboration with my friends from the masks/puppets theater company Y No Había Luz. This is a pretty ambitious project, which will hopefully see the light in 2013. Also in the works is a solo piece for bass and electronics for the amazing Eleonore Oppenheim from Victoire, and an album of my works for solo performer & electronics (including performances from some of my friends from TRANSIT!).

CV: Thanks again for chatting with us, and good luck with your upcoming projects!  You continue to amaze!

You can find out more about Angélica Negrón here:

And check out her upcoming concerts in NYC at Issue Project Room (JUNE 17), The Stone (JUNE 21), and the Historic Lilac Steamship at Pier 25 (JUNE 30)!